Review: Sorcerer to the Crown (A Sorcerer Royal Novel) by Zen Cho 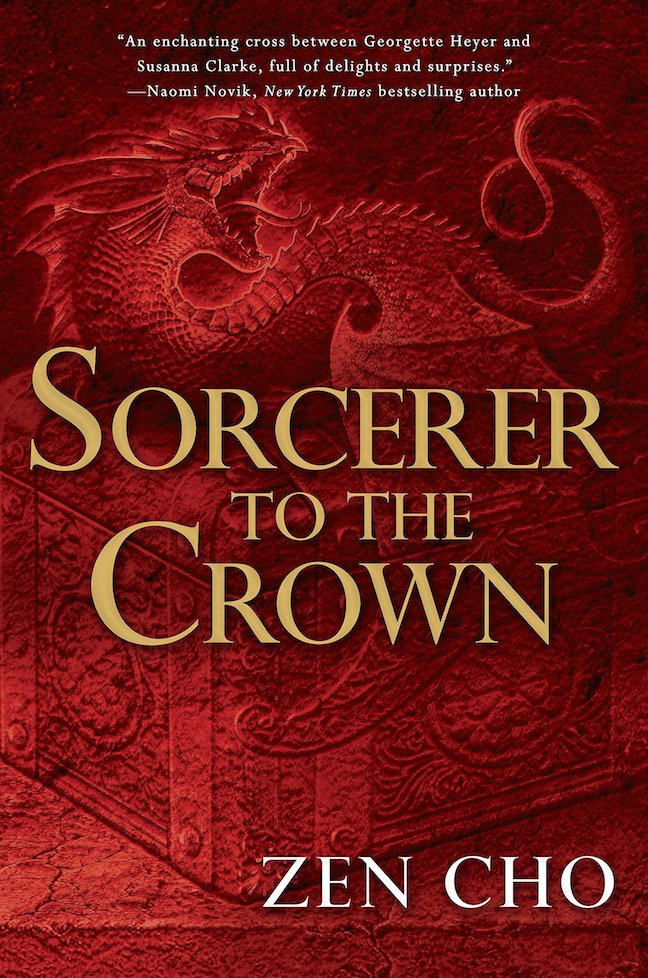 When I read the description and jacket blurbs for this book, I knew I was going to love it.  It is blurbed on the cover by the wonderful Naomi Novik, who likens Cho's book to Georgette Heyer and Susanna Clarke, two of my favorite authors.  And indeed, I did absolutely love this book.  This is London-based author Zen Cho's first novel, and it is really hard to believe that this is her first full-length book.  It is a beautifully and brilliantly written Regency-fantasy-comedy of manners-social commentary.  The blurbs and description of Cho's book make it sound like a fluffy piece of fun.  It is certainly fun, but it is far from fluffy.  I loved this book, but I think the publisher/marketing department have done this book a disservice by selling it as a sort of light Gail Carriger-type fantasy romance comedy of manners.  In saying that, I certainly am not insulting Gail Carriger, who is one of my favorite authors.  But Carriger is attempting to do something quite different from Cho.  Cho's book is fun, romantic, whimsical, and charming, but it is far more than that.  All of that Carriger-Heyer stuff is what drew me in, but this book is also (or perhaps, more accurately) a social commentary and allegory.  It is written in a deceptively light and charming style, but it deals with race and gender, racism, sexism, and xenophobia.  Racism, sexism, and xenophobia were certainly rampant in Regency England, and are still a large part of Western culture, but of course, authors like Heyer, Elizabeth Peters, and Carriger tend to gloss over those aspects of upper-class English society and politics.  They deal with sexism perhaps a little, but in general, those authors revel in a highly romanticized version of historical England.  I am an unrepentant Anglophile, so that has never hugely bothered me, but Cho's book brings all of this to the surface.

And yet she somehow manages to keep this book fun and charming, just like all of those books to which it has been compared.  I don't know how she managed it.  From my description of its social commentary aspects, you might think this is a heavy and depressing book, but it is very far from that.  It is written in the wry and archaic style of Susanna Clarke's brilliant Jonathan Strange and Mr. Norrell, and like that book, deals with a Regency England full of stuffy magicians who are, for the most part, more theoretical than active in their magicking.  While it is therefore no surprise that Cho's book draws comparisons to Clarke's novel, due to the superficial similarities between these books, it is really Cho's interest in the ways in which people of color and women would have been seen and treated in such a society that sets this book apart.  This is a wonderfully written, hugely enjoyable, and thought-provoking novel.  Cho is a huge talent, and I certainly hope that this book gets a lot of attention, as it so richly deserves.  I am so happy that this is only the first in a trilogy.  That being said, for those of you who are weary (and wary) of yet another trilogy, you should know that this novel is entirely complete on its own.  The ending is tied up very nicely, as you would expect from Jane Austen or Georgette Heyer, but you will definitely want to hear more from these characters and about this unusual alternative version of England that Cho has created.  The main female character, who is of mixed race, is a delightful creation who does not conform to the usual stereotypes of romantic heroines.  She is brilliant, strong, beautiful, and ruthless.  The main male character is a former African slave, and his race is a major issue throughout the novel.  There is also a talking caterpillar named Gilbert.  What more could anyone want?

One last note, about the title and cover of the US edition of this novel: the title is bland and forgettable, and not really that evocative of what this book is really about (I won't say anymore, because I don't want to spoil the plot).  More problematic is the US edition cover, which hints rather strongly at a Chinese element.  There is only one Chinese character in this book, and a pretty minor one at that, and while there are major plot points dealing with Asia, the book is really very much about England--its politics, culture, class structure, prejudices, manners, and mores.  Dragons also do not play a large part in this book at all.  I can only guess that the cover was designed by someone who did not read this book, and only looked at the author's name, and went with some (hugely inaccurate) stereotypes (the author is of Malaysian decent)  Or, alternatively, and I don't know which is worse, someone who had read the book still decided that the way to sell this book, given the author's name, would be to play heavily and inaccurately into an audience that is looking for something vaguely Eastern and exotic.  Either way, bad job to the publisher, who is really misrepresenting this book and author, and probably preventing people who would love this book from picking it up.

(I received this book in exchange for an honest review from Penguin Books' First to Read program.)