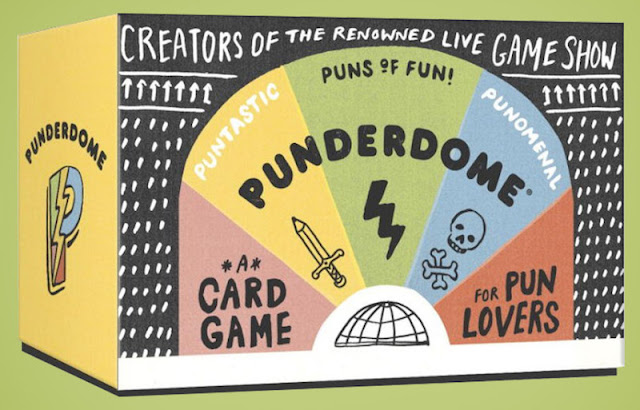 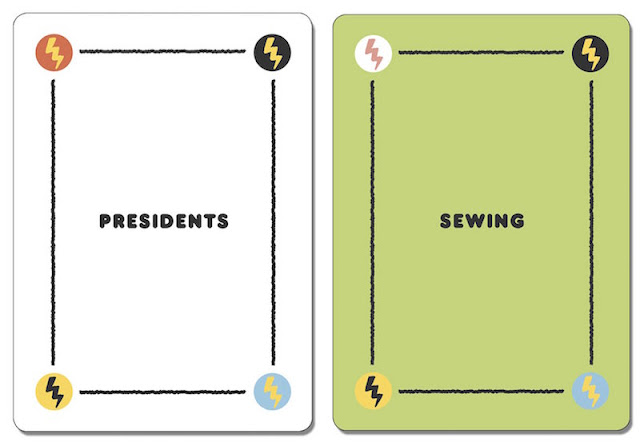 Punderdome is a new card game based on a hipster live pun competition in Brooklyn invented by a father and daughter team.  Like the all of the best games, Punderdome is very simple at heart.  It has no bells and whistles.  Basically, it's a game that encourages you to make up terrible puns.  I have a love-hate relationship with puns.  On the one hand, they kind of annoy me with their stupidity, but I also can't help finding some of them clever and ridiculously amusing.  This game perfectly captures that probably pretty common reaction to puns.  One person is the pun master who randomly picks out two cards (like the ones you can see above), and then everyone else has a limited amount of time to come up with a pun that brings the two words together.  The pun master then decides which pun wins.  Simple!  Punderdome follows in the "venerable," or at least popular tradition of other creative and very simple card games like Apples to Apples and Cards Against Humanity.  The entire game comes in a little box (like the Trivial Pursuit box of cards) with a few envelopes (you can fill them in with your own words that people have to pun with), a couple of pads of paper for pun concocting, and a big stack of cards with words on them.

(I received this game from Blogging for Books in exchange for an honest review.)

Email ThisBlogThis!Share to TwitterShare to FacebookShare to Pinterest
Labels: Review